Who to turn to for advice: smart liberals or smart conservatives? 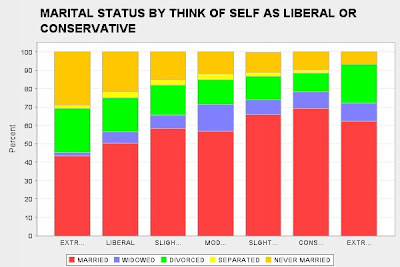 If you're a young person looking for direction, we all know it makes sense to ask a smart person, but does it make sense to seek out an intelligent liberal or conservative? An excellent measure or whether people have their act together or not is whether they can make their marriage work. It's a huge challenge as anyone who has been married knows. Not everyone has the wisdom to figure out how to keep it together.
I looked at the marital status of the smartest people (WORDSUM=9,10) over 30, using General Social Survey data. It is summarized in the above graph. With the exception of extreme conservatives, divorce decreases as one moves in a conservative direction (shown in green).
And this underestimates the success of conservatives since liberals are much less likely to have ever been married and thus are not at risk for divorce. Among all who have gotten married, 33.0% of liberals and only 10.8% of conservatives have gotten divorced or separated.
Liberal IQ does not translate into successful institutions. Conservative intelligence does.
at October 05, 2008
Email ThisBlogThis!Share to TwitterShare to FacebookShare to Pinterest
Labels: IQ, Political Orientation