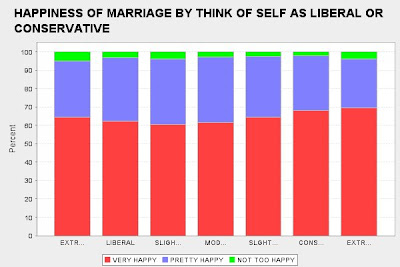 In my previous post, a reader named Jewish Atheist claims that conservatives have lower divorce rates than liberals due to the fact that conservatives stay in unhappy marriages because their religions say they shouldn't get a divorce. He asserts this with no evidence, so let me help him out.
The chart above shows how happy people are with their marriage by political orientation. If JA is right, unhappy marriages among conservatives should be more common than among liberals (who supposedly break up if they are dissatisfied). It turns out that just the opposite is true: conservaties have happier marriages. To be precise, 62.4% of liberals are very happily married, while 67.9% of conservatives are (shown in red).

Jewish Atheist, being the logically consistent commenter that he is, will retort that the religions of conservatives will insist they always tell the truth, which means the happiness gap with liberals is actually even larger since conservatives will not give the socially desirable answer of being happy when they really aren't like irreligious liberals will sometimes do. Uhm, oops, I guess that doesn't work out for him.