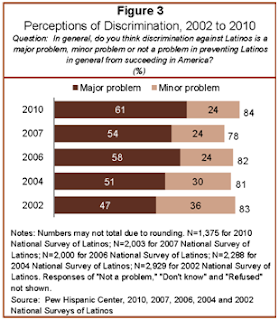 Here's more evidence that Hispanics are indeed assimilating... to black norms. More of them than ever--61 percent--believe that discrimination is a major problem for Latinos in preventing them from succeeding the U.S. It's just too tempting to put the blame on whitey.

Black finger-pointing has forced us to advertise the fact, no, you're not poor because the White Man hates you; you're poor because you lack general intelligence, probably for genetic reasons. I'd prefer it if this knowledge were implicit and, out of a desire to be considerate, we didn't have to make a big deal about it.  But our hand has been forced.  It is now clear that we are forced to speak out about Hispanic IQ as well (which averages about 90 or so).
at February 23, 2011
Email ThisBlogThis!Share to TwitterShare to FacebookShare to Pinterest
Labels: Hispanics, IQ, Poverty