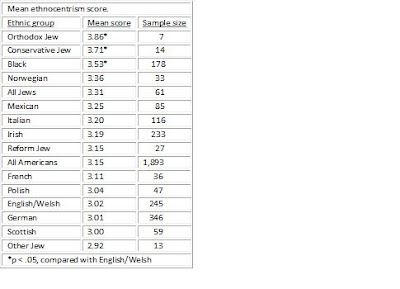 Comments by The Undiscovered Jew (TUJ) in the last post motivated me to look at two items. He stressed that no one seems to back up claims of Jewish ethnocentrism with peer-reviewed research. Looking at the Academic Search Complete database that has 11,200 journals, I did a search on "Jews" and "ethnocentrism" and failed to find even a single relevant article. The closest I could find was a 1976 article studying the integration attitudes of liberal Jews and WASPs working for some civil rights organization in Los Angeles. Worthless. I did find an article based on GSS data examining the ethnocentrism of gentiles.  There are no relevant studies because people are terrified of this kind of topic. The only articles conducted are on anti-Semitism.

TUJ's other point is that I'm basing my conclusion on only one analysis. I've provided evidence before that Jews rank high on ethnocentrism among American ethnic groups here, here, and here.

Let's use the ETHCLOSE variable that TUJ uses in the comments. Respondents are asked how close they feel to their ethnic or racial group, with answers ranging from "very close" (1) to "not close at all" (4). I reverse-coded the values so that a high number indicates high ethnocentrism. The means are shown above for all groups with at least 30 respondents. (The exception to this was to include different types of Jews as TUJ did in his analysis).

Orthodox and Conservative Jews are the most ethnocentric of all groups. The only groups more ethnocentric than all Jews combined are blacks and Norwegians. Even Mex-Ams scored lower.  I should say, however, that all Jews together were not quite significantly higher than Americans of English/Welsh descent at the two-tailed 95 percent confidence level. The Jewish/English gap is one-third of a standard deviation.

On the other hand, TUJ has a point that tribalism varies greatly across types of Jews. While Orthodox Jews are one full standard deviation more ethocentric than Americans of English/Welsh descent, Jews with no religious affiliation actually score a bit lower than the reference group. (Keep in mind that the N's are tiny).

at December 11, 2009
Email ThisBlogThis!Share to TwitterShare to FacebookShare to Pinterest
Labels: Ethnocentrism, Jews