Evidence that Jewish Americans are consistent 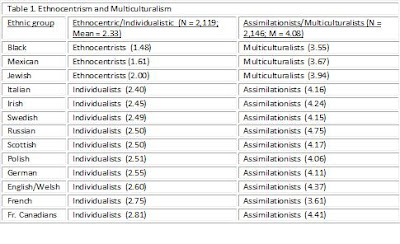 I found evidence that Jewish Americans as a group are not hypocritical over issues of ethnocentrism. The table above reproduces the ethnocentrism scores I calculated in the earlier post. Groups with above-average scores I labeled "ethnocentrics". Groups with scores below the mean are called "individualists."

The means are shown in the right column. Those above the mean are categorized as "multiculturalists," while those below are labeled "assimilationists."  All the groups, including Jews, are consistent. What Jews tend to favor is a society where ethnic traditions are maintained. They are ethnocentric multiculturalists.

So where does that leave so many Americans whose families have been here for many generations, with ancestors from several different countries, who belong to no particular ethnic group? You can see that most white Americans are individualist assimilationists, but that attitude seems so 1950s.

If the country follows the route favored by many Jews and other minority groups, the natural path for these other folks is to organize as white Americans NOA--not otherwise allied. These people have no culture, history or heritage other than a white American one. The country does seem to be headed in a multicultual direction, especially when you consider massive Hispanic immigration mixed with a multiculturalist elite, but I don't think an America with tens of millions of tribalist white people is quite what multiculturalists have in mind.