Do people with certain personalities have more kids? 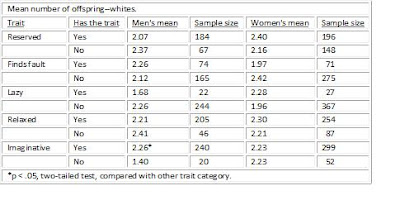 Using GSS data, I calculated the mean number of children of males and females who were at least 45 years old at the time of the survey. I used five questions that attempt to measure personality traits, and the table displays mean number of kids by possession of the traits.

The only categories that are significantly different are imaginative and unimaginative men. The guys without imaginations have fewer kids. Notice how few men will admit that they lack this trait. Those who do are probably particularly self-aware, or they might be especially unimaginative.

The other comparison that is almost statistically significant is finding fault among women. Females who admit to finding fault in others have fewer kids. As with imagination, few people are willing to admit that they do this.

Keep in mind that the heritabilities of personality traits are roughly 0.5. There is little evidence here of differential fertility across personality types. (Let's also remember that individual items are poor measures of traits).