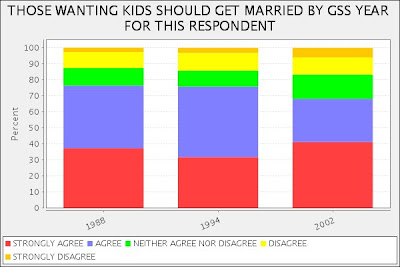 This graph (GSS data) shows trends in the answer to the question, "Do you agree or disagree: People who want children ought to get married." You can see the culture war is growing. Compared to the past two decades, there are more whites who strongly agree with the statement, but there are also more respondents who have no opinion or who strongly disagree.  There are now fewer white Americans who simply agree. 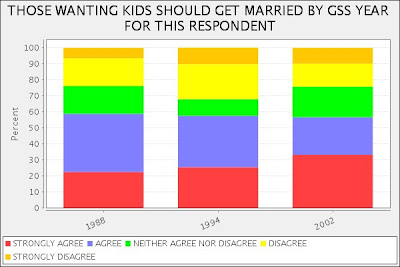 With blacks, there are also fewer now who simply agree that people who want to be parents should marry, but the slack has been picked up by the strongly agree category. There is perhaps a little bit of a moral renewal going on here.

How great it would be if our moralistic energy were directed toward bad family decisions instead of things like using an outdated name for black people. (I witnessed an elderly professor get busted recently for accidently using the word "colored").  Black folks themselves would benefit much more from being shamed for having kids out of wedlock than being timidly referred to as "African Americans."

People need social punishment for socially destructive behavior. I know that if I divorced my wife today and walked away from four children, not a person I know would express a single word of disgust because nowadays everyone is so non-judgmental and so compassionate. American society has gotten to the point where it does nothing moralistic to shape our behavior except to throw us in jail when we have really crossed the line.  (Of course, it shames us mercilessly over contemporary concerns like gay marriage). 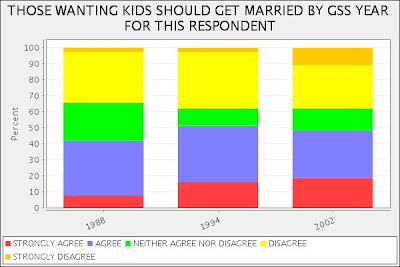 Here we see that Mexican Americans are significantly more permissive toward illegitimate births than either blacks or whites. Just exactly how are these people social conservatives?

To reinforce my point: a recent Pew poll revealed that more Mex-Ams favor gay marriage than whites: 45 versus 39 percent.