Some readers, I'm sure, think I have some odd interest in Mexican Americans. Well, it's not odd--it's simple math. New from Pew: 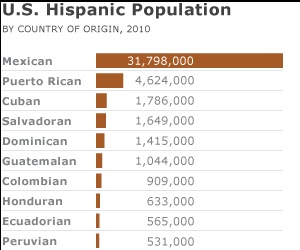 Peruvians are fascinating people, but who cares?
at June 02, 2011
Email ThisBlogThis!Share to TwitterShare to FacebookShare to Pinterest
Labels: Demographics, Mexican Americans