I showed in a recent post that citizens of the United States are more conservative on immigration than most other developed countries. Here is the table again: 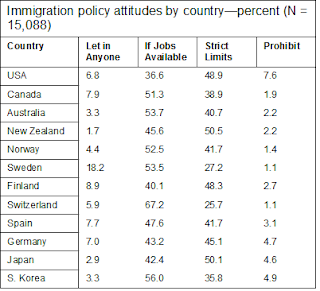 Now I want to look at the attitudes of elites. Here are the views of World Values Survey respondents who have university degrees: 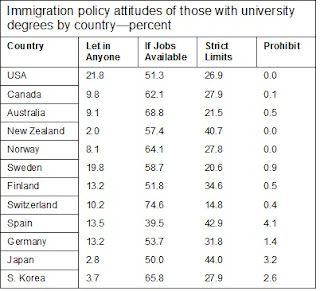 While the first table shows how conservative Americans are, the second reveals that educated Americans are more liberal than their counterparts in other developed countries. Only Sweden and Switzerland look to be more liberal.

This analysis suggests that the divide between the more and less educated in the United States is larger than in many other countries. While regular Americans focus on the costs of immigration, educated Americans buy into the America-is-a-nation-of-immigrants propaganda.
at March 20, 2011
Email ThisBlogThis!Share to TwitterShare to FacebookShare to Pinterest
Labels: Elites, Immigration