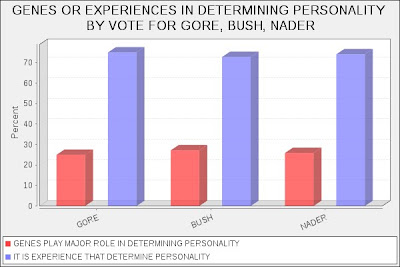 As a follow-up to the last post, I wanted to add that conservatives can draw on biological research without emphasizing evolution (Reader David expresses a similar idea). The point is that there is genetic diversity--whatever its source. It explains what nurturism cannot, and it's not going anywhere fast.

The graph shows two things: 1) a sizeable minority of Americans--I included all races--think that genes play a major role in determining personality; and 2) Republicans are a bit more open to the idea than Democrats. As the science continues to come out, conservatives would do well to sing the results from the rooftops. Leave Darwin out of it.