Trends in attitudes toward Affirmative Action for women 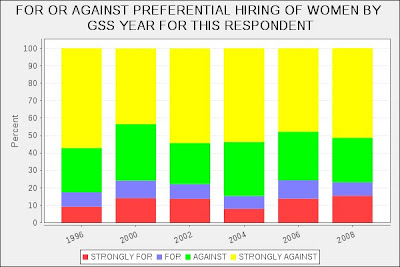 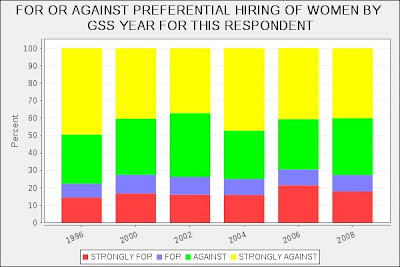 There is so much talk in HBD World over the battle of the sexes, I need to remember to weigh in with data where I can.

The graphs show trends in the responses for white men and women. My first observation is that 23% of men in 2008 need to be bitch slapped for favoring discrimination against men. What the hell is wrong with you?

Second, while a majority of women are against gender preferences, the number favoring it is going up a bit. This is true for both sexes, which the exact wrong trend. The country has become gender neutral at the workplace. What is called for is less sex-conciousness, not more. Wanting to put a woman at the front of the line because she has a innie instead of an outie is a power grab, pure and simply. Justice plays no role in it whatsoever. It's a let's-stick-it-to-a-man-today mentality. This is a bad sign. People are increasingly buying into identity politics, and it's got to stop.
at August 25, 2009
Email ThisBlogThis!Share to TwitterShare to FacebookShare to Pinterest
Labels: Battle of the Sexes, Gender, Gender Preferences