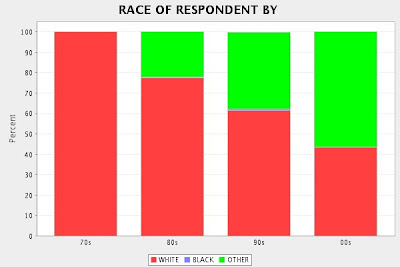 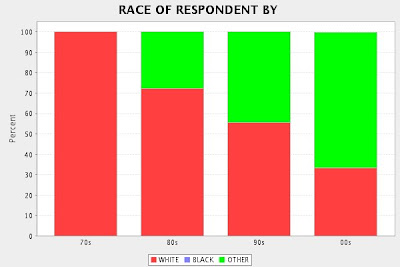 
You can see in the two GSS graphs that the percent of Mexican Americans who say they are white has fallen precipitously over the past four decades. This is true of those born here and for immigrants. In the 70s, 100% of respondents said they were white; by this decade, only 43% of U.S.-born and a third of Mexican immigrants did.

Steve Sailer has written about how recent immigrants from Mexico are more Amerindian and less white. I'm sure this explains much of what we see in these graphs. But since Mexicans have large amounts of both European and Native American ancestry, I wonder how much of the change in racial identity we see is cultural.

Many of the students I see every day could easily describe themselves as white or "other" depending on their preference. All the Mex-Ams I knew in the seventies when I was a kid looked like Mexicans to me, but they saw themselves as white racially. If my suspicion is correct that more Mex-Ams are now rejecting a white identity, that is BAD news for people like me who worry about assimilation. This is on top of Steve's point about the changing biological composition of Mexican Americans.
at August 07, 2009
Email ThisBlogThis!Share to TwitterShare to FacebookShare to Pinterest
Labels: Assimilation, Mexican Americans, Race