Advantages of a breadwinner family 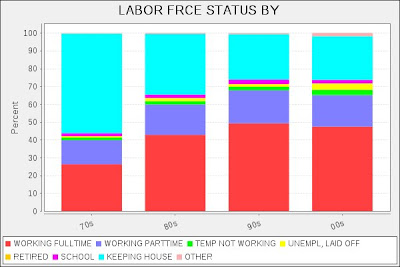 In the last post, I showed that close to 20 percent of white moms are married homemakers. Here's a graph of whites moms of all work statuses and marital statuses over the past four decades (N = 8,209). It's not a surprise that the breadwinner family took a nosedive in the 70s, but things have stabilized pretty much since 1990. If fact, you can see that the share of moms who work full-time has dropped a bit in this decade--it's less than 50 percent.

There is a good case to be made for the breadwinner family. There are married moms who have to work out of economic necessity, but "necessity" is often stretched to ridiculous proportions. I'm surrounded by families with $50,000 SUVs and huge homes that are a pain in the ass to clean and maintain.

In my home, we live modestly and take pride in the fact that we don't give damn what the neighbors think, and my wife gets to do whatever she wants. Her staying at home makes a large family much easier to pull off. Research says a woman will be happiest if she's doing what she wants to do.

If I were a mom, I would opt for homemaking because I could do all the things that are important to me; things that a job would make difficult. First, I could have a large family much more easily and thereby increase my chances of having one child who turned out not to be a disappointment (joking). Little kids are a lot of work, but once they're in school, I'd have plenty of time for reading and blogging--something I don't have much time for with a full-time job. You might respond that employment is so meaningful and rewarding and blah, blah, blah. If that's the case for you, great, we need dedicated people.

Some might think that being a professor is the kind of job that would be at the center of one's life. It may be for some. For me it's a paycheck. Ninety percent of the students hit the mental delete key after completing my final exam. The whole process is hardly worth the time. And if I want to have success publishing, I have to play the whore and give liberal editors what they're looking for. And committee work: oh my God, what a waste of time. Endless gasbaggery. At my institution, we spend 80% of our time trying to figure out how to make students with 95 IQs understand what guys with 140 IQs are talking about.

And I imagine that my job is much better than most. Do you women really want to push paper in some little gray cubicle just so you can keep up with the Joneses? All that stress and hassle? Many look at homemaking as servant work or something, but working women have to do all the stuff at home too, plus everything at work. How did women get conned into working so hard?

Housewifery is a bit like the life of an aristocrat. I mean, how did those folks live? They did whatever they wanted, whenever they wanted. You know, socializing, playing cards, and maybe a little charity work sprinkled in. Isn't that the old sterotype of a housewife? Myself, I'd use my time to read and write, but that's the point: you don't have a boss telling you what to do and when to do it. You choose how to spend your time.

And guys, do I have to convince you that there are benefits to having your wife stay home? Yes, your standard of living will drop some, but my wife saves a lot of money too by doing the things that other people have to pay to get done. I'll confess that it gives me an old-fashioned feeling of pride to be the breadwinner, and a wife feels more for a man that she depends on.

But let's cut to the chase. Do you really want your wife spending her day working under a guy who is probably more manly than you are? Bad idea, especially if you two are having problems. Over the years, I've known several unhappy wives at school who have given me inappropriate attention. Is it some mystery that when you put vulnerable women and authoritative men together, you sometimes get sex? (Don't get me wrong, I've always behaved myself.) I know housewives can be bad too, but exposure matters, and the world of housewives is typically other women and children. Just as I like it.
at August 27, 2009
Email ThisBlogThis!Share to TwitterShare to FacebookShare to Pinterest
Labels: Family