Small move to the left among liberals 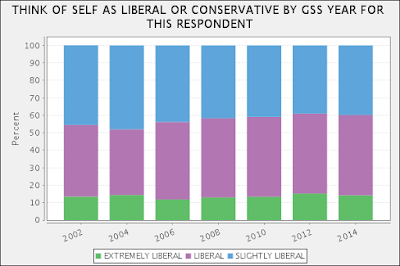 Seeing so many democratic socialists in the Iowa Caucus disturbed me.  I wanted to see if this is part of a larger trend of liberals moving left. The green areas show that the percent of liberals who say they are extremely liberal has stayed at around 14% for more than a decade. Where we see change is the move away from slightly liberal to liberal. In 2002, 41% said they were liberal. In 2014, this had increased five points to 46%.

This is consistent with other data I've seen that the country (just like the national leadership) is more polarized--fewer people in the middle.

We'll have to watch whether Bernie can convince liberals in the South (i.e, blacks and Hispanics) and beyond to vote for him. If he does, this country is more open to European-style socialism than I thought.
at February 03, 2016
Email ThisBlogThis!Share to TwitterShare to FacebookShare to Pinterest
Labels: 2016 Presidential Race, Liberals, Socialism, Voting