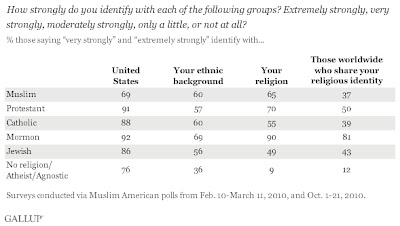 This table is taken from Gallup. It shows the percentages of Americans who strongly agree ("very" or "extremely") that they identify with the listed group. It was apparent to me that identifying with one group is correlated with identifying with others groups, so I calculated correlations across the six religious categories:

Pearson Correlations
U.S./ethnicity .45
U.S./religion .48
U.S./worldwide religion .66
ethnicity/religion .96
ethnicity/worldwide religion .88
religion/worldwide religion .92
First, there is an strong, general tendency to identify with multiple categories. (The average of the six correlations is .73 which is very high.) For example, Mormons have high levels of patriotism and ethnocentrism as well as religious identification. All groups tend to be patriotic, but comparatively speaking, the non-religious groups (atheists, agnostics, and those with no religion) are less patriotic, and they have low absolute levels of identifying with their ethnicity or any religious group. (You might respond that not identifying with a religion is obvious for an atheist or someone with no current religious affiliation, but John Derbyshire, for example, has expressed a fondness for the church of his youth. I have always identified with my childhood faith, both when I was a non-believer, and even now after switching denominations.)
You can also see that, among the groups, ethnic solidarity and religious identification really go hand-in-hand. The correlations are through the roof.
If you're looking for group lovers, search among Mormons, not atheists.
Another point--isn't it interesting that the most conservative groups are the most group-oriented but the least collectivist--in the political sense. Atheists and Jews are the most liberal, but are at the bottom on group-orientation. (This finding for Jews deserves its own post.) Mormons are the most conservative but identify with groups the most. Evidently, hunger for belonging is expressed by liberals in love of the State.
at August 03, 2011
Email ThisBlogThis!Share to TwitterShare to FacebookShare to Pinterest
Labels: Group Identification, Religion