Ethnic groups and interest in politics 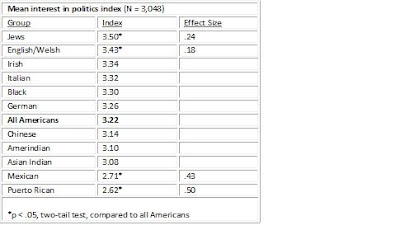 In an earlier post, I suggested that the political power of American ethnic groups might be determined, in part, by differences in extraversion (in addition to mean IQ and size). Steve Sailer makes the sensible point that some groups are simply not interested in politics.

The General Social Survey asked Americans their level of interest in politics. Answers ranged from "very interested" to "not interested." The table lists mean scores for each ethnic group.

Americans with Jewish or English backgrounds have the greatest interest, while Mexican Americans and Puerto Ricans are bored by politics. This helps explains why Mex-Ams have less political power than one might expect. A person active in the Texas Democratic party told me once that Mex-Ams are not sleeping, they're dead.

Next, I'll use GSS data to create a profile of a politically interested person.
at October 05, 2009
Email ThisBlogThis!Share to TwitterShare to FacebookShare to Pinterest
Labels: Ethnic Differences, Ethnic Power, Political Power