How many homosexuals are there, really? 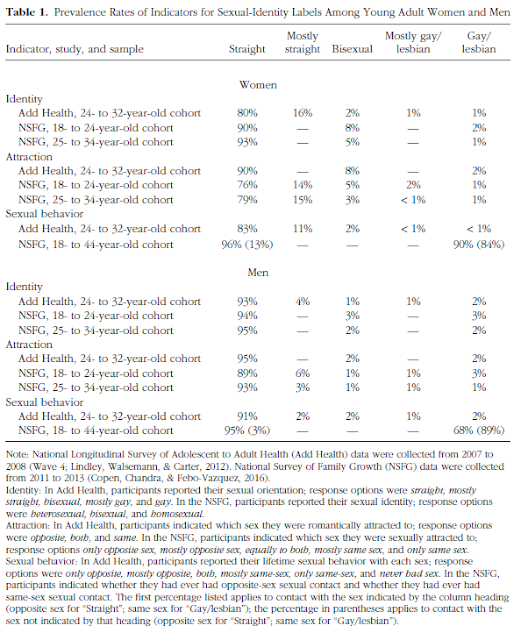 I ran across this study that estimates the sexual orientations of American adults.  Contrary to what some people claim, the overwhelming majority of men and women are straight (or mostly straight). The author sees a continuum where I see a huge category with other little categories, especially for men.

Whether measured in terms of identity, attraction, or behavior, only 1 or 2% of women are lesbian, and 2 or 3% of men are gay. Bisexuality among women is a little more common -- about 5% -- but only around 2% for men. And from what I've seen of other data, bisexuals tend to be hypersexual, so their attractions seem less mysterious from an evolutionary point of view.

Long story short, when these people are called a sexual minority, minority is right.
at August 27, 2018
Email ThisBlogThis!Share to TwitterShare to FacebookShare to Pinterest
Labels: Heterosexuals, Homosexuality, Sexual Minorities