A black-white difference in cortisol level 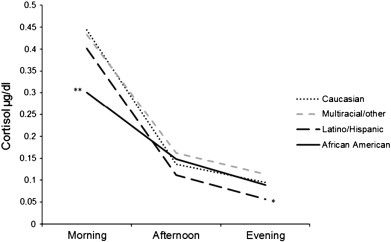 A new study from Homones and Behavior reveals a black-white difference among children in cortisol levels throughout the day. A flatter diurnal slope is associated with more chronic stress and health problems.

As shown in the graph, whites wake up with a significantly higher level which then falls more quickly throughout the day. The different slope remains even when the following factors are controlled: age, gender, non-steroid medication usage, sleep, wake time, socioeconomic risk, psychosocial risk, perceived discrimination, harsh parenting, and parental monitoring.

Compared to blacks, the slope for Hispanics is more similar to whites, although Hispanics do have lower cortisol levels than whites by evening time.

The authors suggest that since morning levels of cortisol are known to be influenced by genes, the racial difference might be due, in part, to genetic differences.
at March 21, 2012
Email ThisBlogThis!Share to TwitterShare to FacebookShare to Pinterest
Labels: Blacks, Hispanics, Hormones, Racial Differences