IQ, marriage, and fertility for men and women: Is it true that dumb guys and smart women are less likely to marry and have kids? And I don't mean each other--I mean at all. The idea is that women like a man who is a bit smarter than them. I generated GSS graphs based on over 3,000 of each sex, white and ages 40 to 60. This first graph is for men. 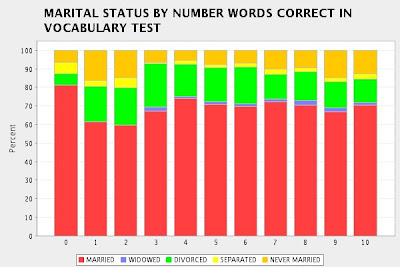 There are only 17 men who scored a zero on the vocabulary quiz, so if we ignore that category, low-IQ guys have a higher share of never-marrieds (shown in gold). When I say low IQ by the way, I'm talking 60s through about 80. Guys smarter than that but below average have high marriage rates. Notice how the percent single is high among the smartest categories. 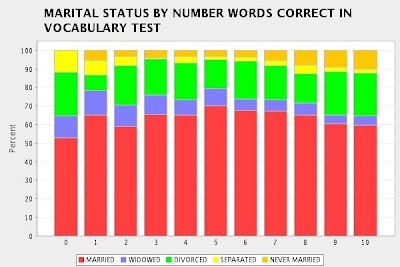 The graph above is women. The percent unmarried rises with Wordsum scores for those who are above the average (which is roughly 6). 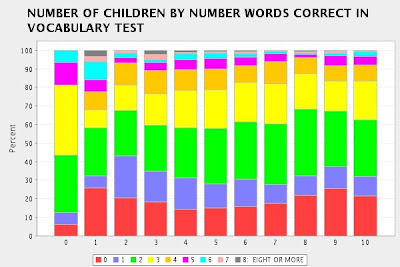 Back to the men, you can see in this graph that while unintelligent guys are more likely to be childless, so are the highly intelligent (once again, it might be a good idea to ignore the zero group). You might be tempted to conclude that those scoring a one might be more likely to have a lot of kids too, but the sample is too small to have any confidence in that. 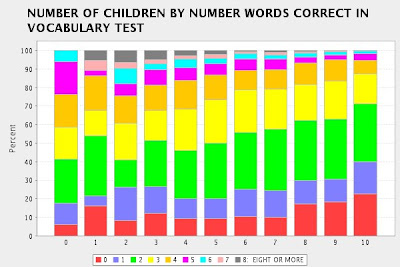 The pattern here is pretty clear. Really smart women are more likely to be childless and less likely to have large family. The only eugenic trend seen in all these graphs is the larger share of dull men with no kids.