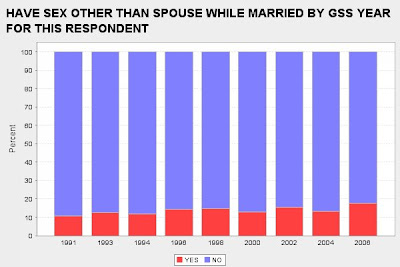 I often think that the country is in cultural decline, but it could be that Old Man Syndrome is setting in. I mean, haven't old people always bitched about how everything is going to hell?
Well I found some evidence that Grandpa might not be totally senile. The General Social Survey has asked people from 1991 to 2006 if they had ever cheated on their spouse. (I limited the analysis to those who have ever been married).
The graph shown above displays the trend for women. I focus on them since the trend is sharper: from 1991-2006, the percent of men who have cheated has only gone up a couple points. For women, the percent rose from 10.6% in 1991 (N = 616) to 17.5% in 2006 (N = 1,038). That's a 65% increase in a historically short period of time.
Another way of looking at it is in terms of convergence: in 1991, there was a gap 10.6 points between men and women; by 2006, the gap was down to 5.6 points. So, women are rapidly becoming as bad as men.
You know, come to think of it, this is consistent with other things I'm observing. You read reports like the following: the gender gap in prison inmates has narrowed; girls plan attacks on other girls and tape the assault in order to put it on YouTube; women are becoming plumbers in large numbers.
I get so pissed when I see all of the Girls Gone Wild ads on channels that young kids watch.
When I teach 8 am classes, my nearsightedness makes it difficult to differentiate the girls from the boys. The girls show up in sweats or gym shorts, and make zero effort to look good. A girl in a class just the other day said that if a woman hits a man, the man has the right to treat as her if she were a man and beat her silly if he can. They should duke it out, chivalry be damned. I see all the Gladiator women on TV and wonder, "What the hell is going on?"
And I blame feminists, in part, for this mutant society I observe all around me. There is a theory which sums it up very nicely. If society encourages women to move into the social roles traditionally held by men, well big frickin' surprise, they become like men, and not in just the good ways. They become more aggressive, more deviant, and more criminal. I ain't that crazy about the way men are, but when you see it on a woman, it's like ten times worse. I'm troubled when I see two guys fighting, but when I see some muscle-bound chick hovering over the victim, all tattoos and trash talk, I feel like becoming a revolutionary.
at May 23, 2008
Email ThisBlogThis!Share to TwitterShare to FacebookShare to Pinterest
Labels: Cultural Decline, Gender