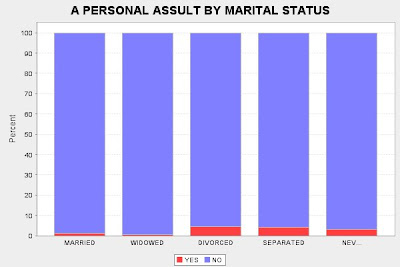 College girls are routinely instructed by social science professors that wife beating is a very common phenomenon, and when it comes to violence, the home is one of the most dangerous places for a woman. The not-so-subtle message is that a woman should think twice before getting married. The only problem with this advice is that, compared to the never-married, married females face only a fraction of the risk of being assaulted. According to the General Social Survey, 5 percent of never-married women were attacked in the past year. That's 5 times the risk that married women have. Marriage does not lead to violence; it protects against it. You know this if you follow common sense. You don't know this if you listen to your sociology professor.