We saw in the last post that religious women are having more babies than women who never go to church. What about men?  Here a graph for number of children for men ages 45-60 (GSS, N = 1,251): 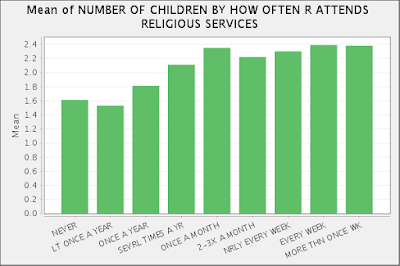 The pattern for men is even clearer than for women: guys who attend more than once a week have a much higher mean (2.38) than those who never go (1.61). That's roughly half of a standard deviation difference.

Is this religiosity-fertility link explained at all by differences in attitudes?  Do religious people want more kids?  Look at the graph for the same age ranges (GSS, N = 2,173): 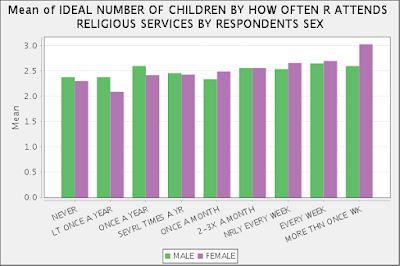 Males are green, and females are purple (I'm a dude, so I won't try to give more precise colors).

There is a small tendency for more religious people to idealize larger families. It seems too small to explain much of the reason why the religious have bigger families. It's probably due to getting married earlier and less willingness to get an abortion if you get a surprise.

NOTE: You have read an updated version.  The earlier version had the error of leaving in cases of those who answered "whatever number people want," cases that were scored an 8.  The results you see above omit these cases (about 6% of the sample).
at February 12, 2019
Email ThisBlogThis!Share to TwitterShare to FacebookShare to Pinterest
Labels: Dysgenics, Eugenics, Fertility, Gender, Religiosity