Data: Do brains get you more sex?

Evolutionary psychologist Geoffrey posted the claim on Twitter recently that human cognitive abilities evolved to attract sexual partners.  Greg Cochran responded that there is no evidence that sexual selection has been a significant driver of mental abilities.

Do intelligent people get more sex?  And bottom line: do they end up with more children?  The General Social Survey measures IQ with a vocabulary quiz, so we're measuring verbal ability, a form of intelligence Miller would think is more important for courting than, say, math ability.  I'll focus on ages 18-35 since this is a critical time for sexual competition, and frequency varies with age. Here's a graph of the frequency of sex over the past year (GSS, whites, N = 12,757):

Sexual frequency drops off for higher IQ mean, but then it reverses for men in the highest IQ category.  Their average is 3.7.

(Notice how the lowest IQ women have the most sex by far.)

What about kids?  We've already documented that high IQ women have fewer kids, but let's focus on men. This graph is for whites ages 45-60: 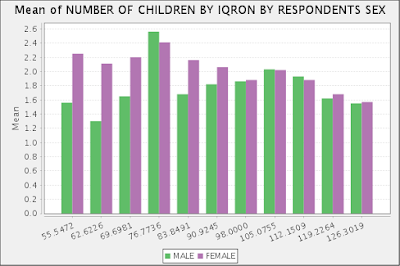 For men, peak family size is for those with IQs of 77.  Men at the highest IQ level average fewer children than almost any other group.