Abortion is for the educated 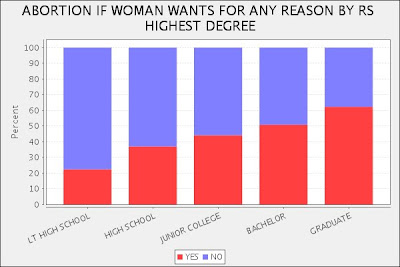 This graph is based on answers given by 3,683 women (GSS) asked if a woman should have the right to an abortion for any reason. There is a precipitous increase in support as education increases. For example, women who earned a graduate degree are 1.7 times more likely to support abortion on demand than high school graduates.

Now, why would this be? Are high-status women so much more concerned about uneducated women needing easy access to abortion than the low-status women themselves?  Of course not. Educated women are preoccupied with the ability to freely get an abortion, whether it be for themselves, a daughter in trouble, a son's girlfriend, a niece, or a friend's daughter. It's practically a requirement of "enlightened" womanhood to be pro-abortion. How are you going to run the world with all those rug rats pulling you down? 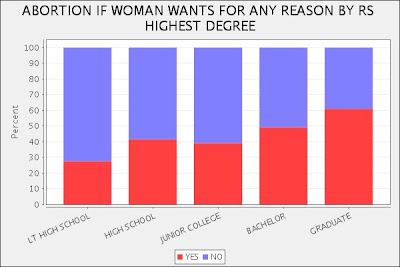 Here we see a similar pattern for men asked the same question in this decade (N = 3,060). Once again, access to abortion is a concern of educated people. Educated men want the autonomy to facilitate a move up the social ladder, so abortion is a vital option since children are long-term, expensive entanglements. Elites are preoccupied with freedom and money and status. Kids are not a priority.

As shown by the graphs, some ordinary people have these concerns--many do not. But this kind of thinking is the norm among elite Americans. If we look at women with 20 years of education (the highest category in the GSS data) the number in favor of abortion for any reason rises to 70 percent (data not shown). Among these women, it's the norm. Abortion is for the educated.
at November 27, 2009
Email ThisBlogThis!Share to TwitterShare to FacebookShare to Pinterest
Labels: Abortion, Education, Elites