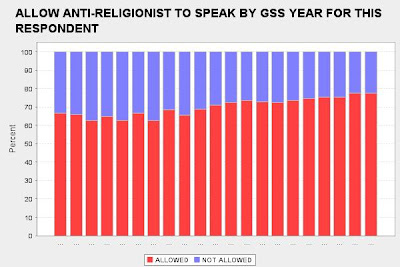 Since 1972, the General Social Survey has asked almost 30,000 Americans if a person who is against church and religion should be allowed to speak in public. In 1972, it was 66.6%, and by 2004--the most recent year available--it was up to 77.5%. It's an encouraging trend, but I'm not sure that it's a reflection of a growing appreciation of free speech as a general principle. Over the years, people have also been asked if a racist should be allowed to speak, and the number has not budged from the 62.0% observed 35 years ago. So it looks like this is simply a matter of more people being comfortable with anti-religion. These numbers also tell us that racism has become more of a taboo than making statements against religion. This is why Arthur Jensen is much more a villain than Richard Dawkins.
at February 24, 2007
Email ThisBlogThis!Share to TwitterShare to FacebookShare to Pinterest
Labels: Free Speech