The Bell Curve has not convinced the American public 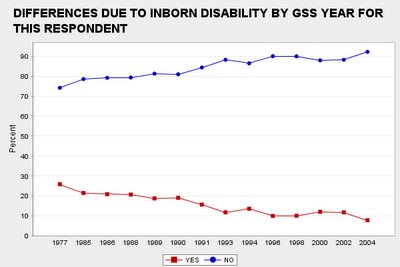 Since 1977, the General Social Survey has asked Americans if the lower economic status of blacks is due to inherited differences. The lower line on the graph above shows that the percent of whites who answer "yes" has gone from few to fewer. Twenty-six percent thought genes were the answer in 1977, and that number fell to only 10% by 1996. Following the publication of the Murray and Herrnstein's book, the genetic view rose slightly, peaking in 2000 at 12%, but by 2004 (the latest year available) it hit an all-time low of 7.7%. The popular assumption that race does not matter continues.
at October 02, 2006
Email ThisBlogThis!Share to TwitterShare to FacebookShare to Pinterest