Maybe crime doesn't have squat to do with lack of education 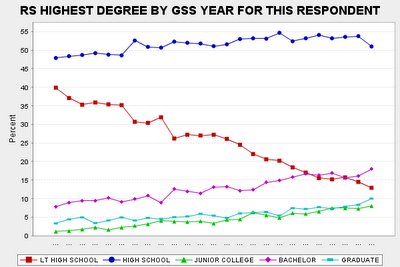 Have many times have you heard the liberal bromide that education is the key to the crime problem (and a host of other social ills)? I have always been skeptical of this idea, and it is one of those things experts always say and seem to think it is so obvious that nobody needs to bother to demonstrate it. I know the criminological research literature quite well, and the only thing I have seen documented is that kids who dislike school and perform poorly are considerably more likely to be delinquents. This tells us more about the kid than it does his education. In macrolevel research, eduational variables are often not included (which tells us they don't matter) and they don't seem to have much impact when you do actually see them analyzed. I'll guarantee you that, compared to percent graduated from high school, percent black is ten times the predictor of homicide rates.

The graph above (from the GSS) shows a large, steady decline in high school dropouts in the past 3 decades (look at the red line). While crime has been trending downward over the last decade or so, it was on the increase during the 70s and remained at a high level during the 80s. You might counter that we must focus on high risk groups, not the general population, but the overall trend was the same for young blacks, for example: the percent not finishing high school dropped from the 30s to the teens over this same period of time. And the sharpest drop was in the 1970s, the decade that saw more crime, not less.
at June 11, 2006
Email ThisBlogThis!Share to TwitterShare to FacebookShare to Pinterest