I remember the first department party I attended as a PhD student in sociology.  I joined a conversation between a young faculty member who specialized in social mobility and a professor who was an international expert on urban sociology. I was stunned when the older guy said to the young guy, "Why do you study American social mobility? There is no such thing."

I had a bigger mouth then, and said, "Could've fooled me. My parents never stepped foot on a college campus. I have one brother working on his JD and another has a BS in business and will probably make double what I end up making." (Turned out to be more like three times as much.) He said something about exceptions and moved on to something else.

So the sociological view is that kids inherit the social class of their fathers because the system is rigged that way. The logic of this theory is that there should really be few exceptions. The genetic view, on the other hand, is that since children get their genes from parents, they will tend to end up where their parents are, but since each child gets a unique combination of genes, and since each child is exposed to unique developmental events, offspring will often depart from the class of their parents by either moving up or moving down. The pure sociological view has no explanation for these departures. An open, fluid, meritocratic America is a fiction, according to these people.

What does the General Social Survey say?  You can see below a contingency table of father's and offspring's highest degree earned (sample size = 1,325, ages 30-39, years 2010-16). (I use education because we have data for both generations): 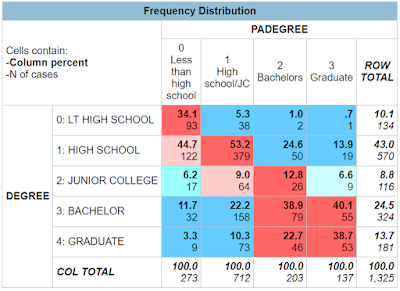 As both theories predict, there is a tendency to end up where the old man did, but there are PLENTY of exceptions.

Adding up all the cells where the kids went further in school than dad, we get 35% of the total. If we do the same for all offspring that fell short of their father's education, we get 15% of all respondents. Yet we're told you're never supposed to be able to fall in American society where privilege reigns.

Intergenerational stasis happens to just 50%. This pattern is consistent with a genetic/developmental theory of outcomes. It does not support the opinion of my America-hating professor.