After blogging recently on sexual inequality among men, I'm surprised that it's so easy for people to be so skeptical about basic ideas that come from evolutionary theory.  I would never question that some men have more sex than others. It's obvious. I don't naturally waste limited mental energy on this type of issue until someone comes along and questions it.

So, it made me wonder: How many people doubt that high status men tend to have better looking wives?  Here's a graph from GSS based on 587 women whose physical attractiveness was rated by interviewers (1-5) and who were asked the educational level of their spouses: 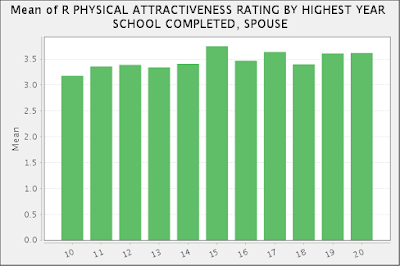 The x-axis is years of school completed by the husband, and the y-axis is the mean of the wives' attractiveness.

You can see that attractiveness tends to rise with the husband's education. To get specific, high school dropouts have wives that are roughly three-fifths of a standard deviation less attractive than the most educated group.

I don't know about you, but I'm shocked.

UPDATE:  I'm overeducated and have a smokin' hot wife, so I'm biased.

ANOTHER UPDATE:  I suspect the status-hotness relationship would be even stronger if men rated the women. Most GSS interviewers are women, and I strongly suspect they tend to be biased toward rating a woman's face, dress, cosmetics, etc., while men tend to focus on curves.
at December 05, 2018
Email ThisBlogThis!Share to TwitterShare to FacebookShare to Pinterest
Labels: Evolutionary Psychology, Physical Attractiveness, Social Status