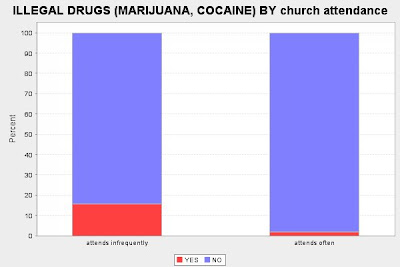 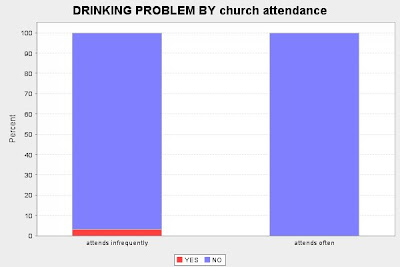 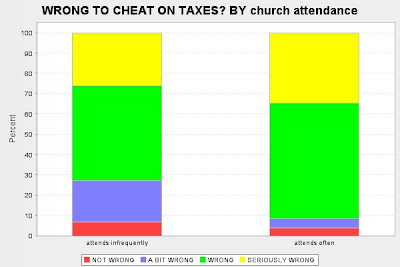 In the last post, I was impressed with the connection between frequent church attendance and moral or self-restrained behavior among young adults (ages 18-25). Let's see if we find the same thing with other General Social Survey (GSS) indicators. I recoded church attendance so attending monthly or more frequently is categorized as "often", while less than monthly is "infrequently."

The top bar graph displays illegal drug use in the past year by church attendance. To be exact, 15.8% of those who go infrequently use illicit drugs versus 1.8% of regular churchgoers.

The graph in the middle shows the percent who have a drinking problem: it's 3.1% compared to none of the frequent attenders. (Of course, the real number is higher than zero, but a sample of 269 didn't pick up anyone).

Finally, attitudes toward cheating on taxes are shown in the bottom bar graph. Of those who don't make it to church much, 27.3% think it's either not wrong or only a little bit wrong, while only 8.4% of regular churchgoers feel the same way.

Having looked at several GSS indicators, young adults who behave in traditionally moral ways or who express moral views go to church more often. These data don't tell us whether good people go to church, or that church makes people good, but it's a compliment to religion either way.