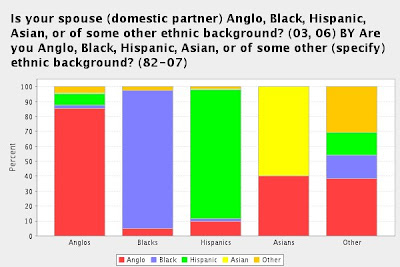 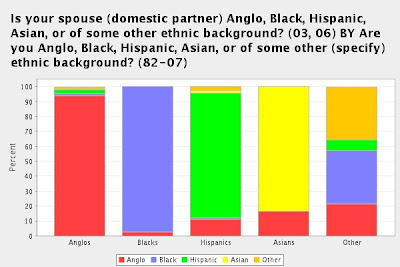 The Houston Area Survey asked 813 residents about their ethnicity and that of their spouses. The two graphs above display the amount of intermarriage for each racial/ethnic group for each sex. While whites, blacks, and Hispanics are all numerous in Houston, the "Asian" and "other" categories are based on very small samples.

For both men and women, Asians mix the most, and it's almost exclusively with whites. This shows white-Asian compatability, and perhaps the difficulty Asians have finding a co-ethnic mate because of small numbers.

Whites, especially women, usually marry within their race: the percentages are 93.9 for females and 85.6 for males. When they marry interracially, it's most often with Latinos.

Roughly 85% of both Hispanic men and women have spouses of the same ethnicity. Approximately 10% of both sexes are married to whites.

Notice how in this sample no Hispanics or Asians have black spouses.

These results indicate that there is high compatibility between whites and Asians, and whites and Hispanics, and low compatibility with the two minority groups and blacks. Few whites are married to blacks as well: 1.0% of white men and 0.9% of white women.

The sample is really too small for an analysis limited to young people, but I will say that it looks like the trend is more marrying outside of one's group among young whites, blacks, and Asians, but less of it among Hispanics. Their growing numbers might be increasing homogamy.
at April 21, 2008
Email ThisBlogThis!Share to TwitterShare to FacebookShare to Pinterest
Labels: Intermarriage, Race